If you're a newbie, here's a featured credit card to get you started.
Home | Destinations | Oceania | Kiribati [EXPIRED]

(Offers on this page are now expired and are no longer available.) 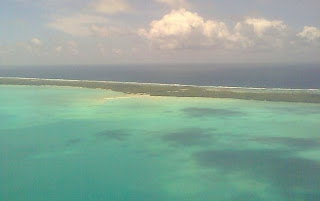 Bon Riki, Kiribati
Life in itself is a trip. Excuse the cliché — a “journey.” And on my journey I’ve learned a lot. If I can pass on one lesson, it’s this: Make sure you travel with decent travel insurance!
After moving to Australia, the stars aligned for me to land a casual job working as an emergency evacuation nurse. The company I worked for evacuated people from the South Pacific Islands to Australia to receive treatment they wouldn’t otherwise be able to receive.
While standing over my Ikea-purchased wok and some curry goodness, I received my first call from my supervisor that I was headed to Bon Riki to bring an ill woman back to Australia. Having no idea where I was headed, I gathered necessary equipment from the base, met the doctor and pilots I’d be traveling with, and I was off into the Pacific aboard our outfitted Intensive Care jet. It may sound glamorous, but for someone like me who is  6’5,” the jet is too small to stand, there’s no toilet, and no frequent traveler magazines in the seat pocket.
For hours we fly over the blue waters of the South Pacific. Surprisingly, we crossed the Equator and entered Kiribati airspace (pronounced Kiribas; apparently the “s” on the typewriter was broken when the indigenous language was translated to English script, hence “ti” was used to substitute the “s” sound). As we banked to the right, we began descending into the most beautiful horseshoe-shaped lagoon. Just before touchdown, however, the pilot went full throttle and aborted the landing. The co-pilot and pilot exchanged chuckles as the doctor and I exchanged worrisome looks of concern. The landing was aborted due to someone riding a bicycle on the runway. “Where the hell are we?”
The doctor and I made our way to the waterfront hospital where we prepped our patient for transport back to Australia. Meanwhile, the pilots struggled to reach the only man on the island capable of driving the fuel truck to refuel our plane. But the fuel truck driver had more pressing concerns. He was out fishing in order to put a meal on the table for his family. They found him eventually and our return flight plan was submitted to Fiji, the Pacific’s air traffic control center. And because Bon Riki airstrip is a day-only airfield, we needed to be airborne before sunset. Our patient loaded into the jet, we anxiously awaited clearance from Fiji, and the sun was dangerously close to the horizon.
At this stage, word had spread across the island that a jet was taking someone to Australia. Locals began to congregate at the airport and along the runway. After some tense moments between the pilots and air traffic control, we had clearance. Doors closed, we taxied to the end of the runway, all along the way men, woman and children stood waiting to see us off. As the sun diminished below the skyline we took off, swerving to avoid a stray dog frolicking on the runway. The local children waved and our patient smiled as she looked out the window at the spectacular colors of sunset.
Illness and injury can strike any of us at anytime. Please be prepared and carry decent evacuation insurance. You never know when you’ll need it.
Kiribati is an isolated, developing country covering miles of open water renowned for reef fishing. There are minimal basic accommodations available. This is a truly remote destination for the adventurous traveler. Air Pacific flies to Bon Riki via Fiji.

The Time Frame of the Platinum Card Delta Promotion