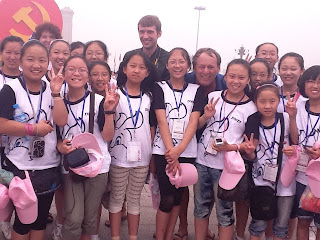 We have had quite the full schedule since returning from the Great Wall. After a shower and short nap we headed to the night market for a look at some traditional Chinese delicacies. The outdoor stalls lined the street with the following offerings all deep fried on a wooden stick:

We then ventured on to one of the main shopping streets and all the biggies were there. Cartier, Gucci… you know the lineup. The government owns the buildings and rents to the tenants, I think.

Katy and Andrew headed into a department store while I waited outside to people watch. A small boy with his mom and dad, and it appeared to be grandfather and grandmother in tow passed and greeted me loudly with a “Where are you from?” I answer the United States and he would not take his eyes off me. They all stared from inside the store so I Walked in and introduced myself to him. Mom helped with his English and we exchanged names and smiles. It was a special moment and I gave him a US coin as a souvenir. Little did I know the scene would repeat itself numerous times in Tianamen Square. I did note there were very few Caucasians in the shopping district. 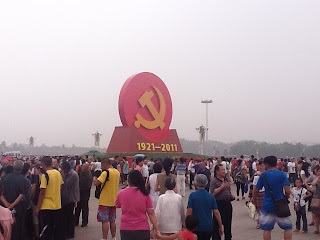 Our morning started heading to the Square where our driver Chu dropped us off by the Peoples Congress, went through security and entered the Square. Our plan was to visit the tomb of Chairman Mao but we were turned away for having improper footwear that did not show respect for the Chairman. after calling our driver back and retrieving our cameras we headed back to the Square to cross the street to the Forbidden City.

At least ten times in the Square we were asked to have our photos taken with Chinese families and in one case a whole classroom asked for our pictures. It seems for many from rural China they have never seen an American and we were their first. It was all smiles and friendship and gave all three of us the feeling of being good ambassadors for America. The people loved us and we enjoyed the interaction. Jenny translated the conversations for us and they were fascinated with my iPad which I was using for photos. I have it set up to transmit these posts and photos.

The Forbidden City is to say the least huge. All the structures were built starting in 1406 and the buildings and courtyards go on forever. The weather was hazy again but hot and humid and at times very uncomfortable.

After a traditional lunch of seven dishes and diet cokes we headed for the Temple of Heaven and another long hot walk. The structures are all wood made without nails and beautiful. Andrew will be contributing more photos in the weeks to come.

It was an amazing day, with the sights, sounds, huge crowds and realizations of where we were and what we were seeing. And the people, made the heat and humidity melt away. It was a great day.